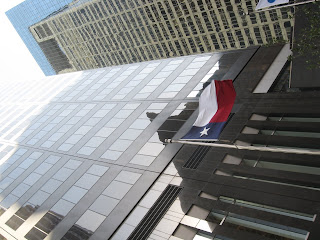 Houston, like Texas, is quite large. It goes on and on and all around. And, as befitting an aging oil-town, it is full of cars. I don't see very many taxis or busses, and when you are staying out in Cloverleaf, a burb of Houston, that can be a problem.

"Texans haven't quite discovered green yet," says my friend Nic in her clipped British-California accent.

This led to a discussion about how sometimes different parts of the world identify with different body parts. In Buenos Aires I was mildly shocked to hear the inhabitants refer to their lovely city as "the a-hole of South America" because of its location on the southern tip of the continent. We wondered if the usage of the A word around here as a suffix to just about anything indicated that something similar was at play here in Houston, which is also a pretty southernly city in the U.S.

"What about Miami?' asked Mike.

Actually, I have been pleasantly surprised by Houston, forced to break out of my California Bay Area elitist ways to recognize that this is an exciting, dynamic, artistic, multi-cultural city, mixing Latino, Louisiana Cajun, African, African American, Anglo, liberal and conservative and and a whole lot of other spicy stuff into a pot full of drawling yes ma'am yeah baybee Texas twang.

P.S. You can get an apartment here for less than the price of a room in San Francisco.
Posted by Lisa Gale Garrigues at 8:17 AM

Email ThisBlogThis!Share to TwitterShare to FacebookShare to Pinterest
Labels: Texas