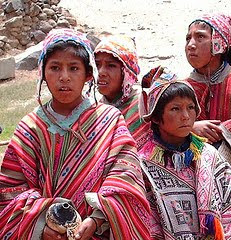 This was sent to me by actress and activist Qorianka Kilchner. Her website, On-Q-Initiative, tells about how to get involved and some of the great stuff she's doing in Peru.


Children in the remote southern highlands are often malnourished
Almost 250 children under the age of five have died in a wave of intensely cold weather in Peru.
Children die from pneumonia and other respiratory infections every year during the winter months particularly in Peru's southern Andes.
But this year freezing temperatures arrived almost three months earlier than usual.
Experts blame climate change for the early arrival of intense cold which began in March.
Winter in the region does not usually begin until June.
The extreme cold, which has brought snow, hail, freezing temperatures and strong winds, has killed more children than recorded annually for the past four years.
A total of 246 under the age of five have died so far, only half way through the winter months.
One third of the deaths were registered in the southern region of Puno, much of which is covered by a high plateau known as the altiplano which extends into neighbouring Bolivia.
Aid workers say prolonged exposure to the cold is causing hypothermia and deadly respiratory infections such as pneumonia.
Children, who are often malnourished, are more vulnerable to the extreme cold.
Poverty is widespread in Peru's southern highlands and there is a lack of healthcare and basic services.
The government has declared a state of emergency in the affected areas but critics say the cold snaps are predictable and the annual deaths preventable.
Many have blamed government inefficiency for the deaths.
But Peru's Health Minister, Oscar Ugarte, has said regional officials have not effectively distributed government resources.
Meanwhile in the capital, Lima, it has become an annual ritual for businesses and ordinary citizens to donate blankets, clothes and food for the victims of the cold weather in the south of the country.
Posted by Lisa Gale Garrigues at 7:21 AM