At Starbucks, No Leaning in These Lean Times 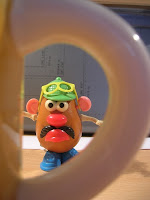 Starbucks baristas are now being trained with Mr. Potato Heads and speed timers to make new pots of coffee every eight minutes,according to the Wall Street Journal. And no more leaning forward to get supplies from under the counter.


It's all part of a "Lean Strategy" that has been successful with Toyota and other manufacturing industries, experts say.

There's a lot of talk on the blogosphere about how successful the Lean Strategy will actually be in perking up Starbucks flagging profits, with some baristas and customers going grumpy over the changes they call 'robotic', and others calling the protestors a bunch of whiners. It has even been suggested that Starbucks, who recently added instant coffee to its usual gourmet fare, is becoming more and more like McDonalds.

Starbucks' vice-president, Scott Heydon, assures us in the WSJ article that the baristas are being taught to speed up so they can spend more time with customers.

"Mr. Heydon says reducing waste will free up time for baristas -- or "partners," as the company calls them -- to interact with customers and improve the Starbucks experience. "Motion and work are two different things. Thirty percent of the partners' time is motion; the walking, reaching, bending," he says. He wants to lower that."

Well now, that's nice, Starbucks is looking out for their baristas' knees. I appreciate that. It will definitely add to my Starbucks experience.

But wait a minute. In the very next graf Mr. Heydon tells the WSJ:

"If Starbucks can reduce the time each employee spends making a drink, he says, the company could make more drinks with the same number of workers or have fewer workers."

Same number of drinks, fewer workers. Hmm, maybe this isn't about the baristas' knees or about 'improving the Starbucks experience' but about perking up those saggy profits.

In other words, speed up dude, so we can lay you off.

Starbucks, of course, is a business, it's entitled to perky profits. I have no argument with that. But, the bottom line is--will it work?

Or will customers vote with their feet and decide they'd rather have a relaxed friendly barista at the local independant coffeeshop than a harried but efficient timecruncher at Starbucks?