Monkey on My Back 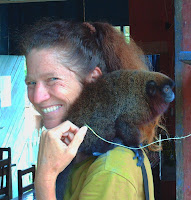 Several people have asked me what that thing is on my shoulder in my profile photo. So I will now let the secret out: it's a monkey. The monkey and I were in the backyard of a tiny café in a Peruvian jungle town called Salvacion, where I was on an investigative assignment for the newspaper Indian Country Today.

I have never really considered monkeys my power animals, preferring the grace of birds or the sensual power of cats, or even the tricksterish freedom of the coyote, or the haunting midnight song of the wolf. But here I am in my profile photo with a monkey on my back.

What’s up with that?

“Monkey on my back” is an expression which apparently originated with heroin users, who have said they have to feed their addiction because if they don’t it feels like they have a monkey on their back.

So this little monkey in my photo is a public confession that I am an addict. Not to heroin—much too costly and messy. But to a number of other things. To writing, for instance, this endless stream of self-generated gibberish which sometimes brings me to extraordinary focus and clarity, and sometimes just gibbers. To exploration, to the unseen image or realization or friendship that lies just around the corner, the boat tied up on the dock and ready to sail, the doors of the next train sliding open, the rickety bus to the next jungle town. To…coffee with one t-spoon of sugar and some cream. To a really good novel that seduces me into its world. To paintings whose colors and textures rearrange the blood in my veins. To the news that I can’t get on CNN, and have to rummage around the internet to find. To intelligent conversation.

Well, I could go on, but you get the idea.

I am also addicted to spiritual books and teachings that talk a lot about the Monkey Mind, that chattering and addictive self that won’t let you just sit under the Boddhi tree and be peacefully enlightened. I offer you this Self-Portrait-with-Monkey as a public acknowledgement that I am no longer fighting my Monkey Mind. I have it, as you can see, on a very thin string. But it will probably always have something to say to me. So now I just listen. And eventually, when it’s had its say, it usually shuts up.

Finally, what I like about monkeys is that they remind me so much of our own species--they are like tiny rambunctious humans that throw our own silliness back in our face. So I proudly wear this monkey on my shoulder because I think most humans take themselves much too seriously, myself included.
Posted by Lisa Gale Garrigues at 7:21 AM

Lisa, I know just what you mean. Yet, I have to cherish my monkey mind, too. I have a yoga teacher who suggested I use a perpetual mantra. I tried it for a while - and yes, it was very calming, etc...but the weird, sudden ideas from my monkey mind were lost, the images that no one but a poet would think to compare to each other, the graphic reactions that constitute my REAL feeling about things, not the 'policy' reactions I sell myself that are more peaceful...let's hear it for the monkey mind! And let's hear it for this piece, which I discovered far too late, and which is beautifully written!

Lovely to hear from you and your brilliant monkey mind, Deborah! I hope you are well.