A Visit to Obama at the Cesar Chavez Memorial


Last Friday I got an email from the United Farmworkers inviting me to Obama's dedication of the Cesar Chavez Memorial as a National Monument.

By Monday morning at 5:30AM I was driving down a cold and dark  Highway 99 to attend the event in Keene, California.   Get here before 7:30AM,  the confirmation email said,  expect to stay until 5PM and don't bring any food or water.

My kind of an adventure.

Light snacks and water will be provided, the email said.  And hopefully some portapotties, as well, I'm thinking, as I take another sip of my pre-dawn coffee from the travel mug in my car.

As instructed, I pulled into the parking lot in Tehachapi California.  There they were-- the long line of people waiting for the buses to pick us up and take us to the memorial.  I park my car.  Someone gestures towards the end of the line.  I walk a very long time to find it: 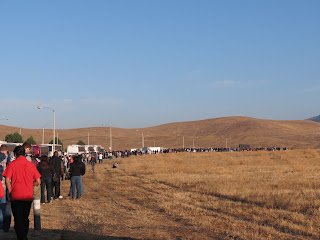 Behind me, the line continued to grow. 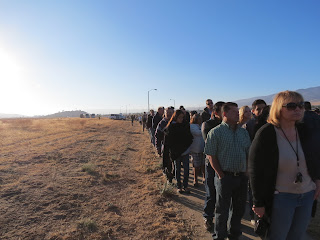 We waited and waited.  Finally, some buses pulled up.  Some people got on.  More waiting.  A few more buses, a few more people let on.   Two hours later, I was waiting not in a line but in a jumbled crowd while behind me  a woman  complained loudly in a German accent and  next to me a laughing group of  Mexican-Americans sang "De Colores" several times over.  The German woman quieted down and listened to them.  "Vat are you sinking?" She asked.  "Somesink about colors, yes?"

Finally, another bus pulled up and we were able to get on. 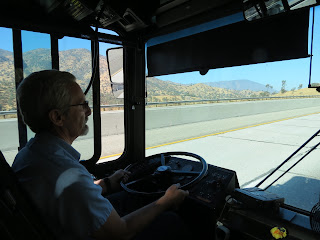 Some of the "De Colores" group had gotten on with me, educators and students from local colleges.
Despite the wait, they were smiling and laughing.  "We're so lucky to be here," they said.  "We're so excited."

I agreed with them.  I was there not just for Obama but for Cesar Chavez.  And not just for Chavez but for all the people he fought for and all the people who fought with him.   Because I remember those days, the grape boycotts, the marches.  I had spent a lot of time working with Latino immigrants, and this was an event I wanted to attend.  Okay, it was Obama trying to get the Hispanic vote.  Okay,  Cesar Chavez wasn't perfect.  But still.  This was an event that was larger than the few thousand people who were able to attend it.

When I got there, the vast surrounding hills  of Tehachapi made the crowd look much smaller, like folks mingling at a county fair. 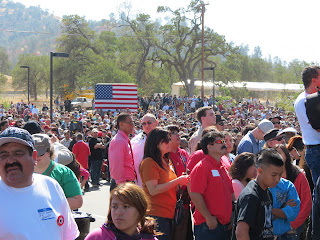 You couldn't help but see the excitement and anticipation on people's faces: 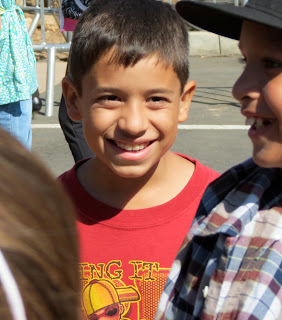 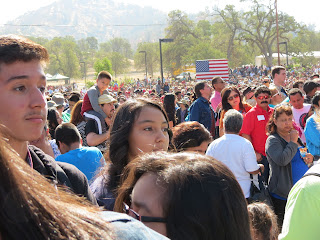 There were lots of high school students, some of them the children of farmworkers,  many of them wearing cool t-shirts. 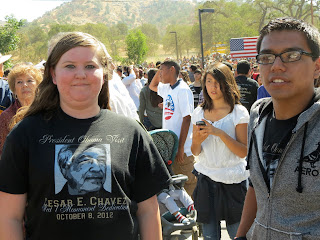 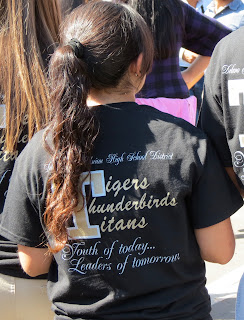 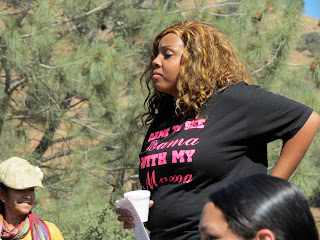 Another cool t-shirt:
"I Came To See Obama With My Mama 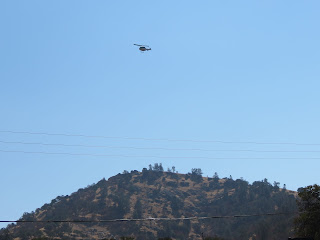 High above the helicopter, a red-tailed hawk endlessly circled the crowd.  He didn't want his photo taken.


There were also plenty of Secret Service men: 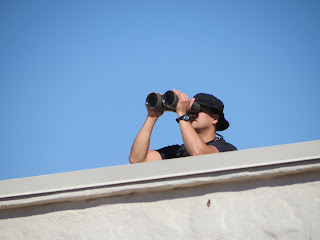 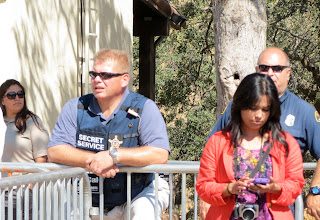 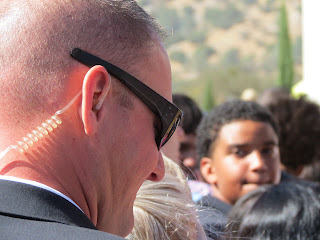 Why this guy positioned himself directly in front of me I'm not exactly sure.  But when I raised my arms to give myself a stretch after standing in the same position for a long time, his whole body suddenly jerked and swiveled back as if someone had fired a shot.

As part of the festivities, local talent entertained us on a small stage: 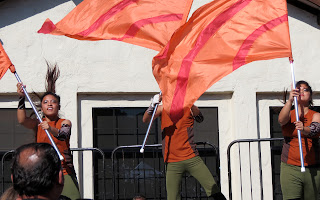 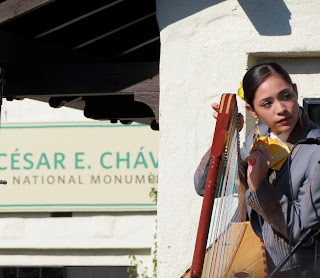 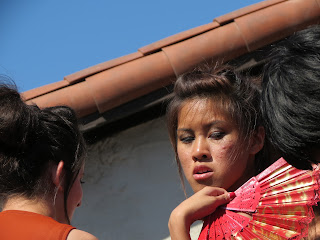 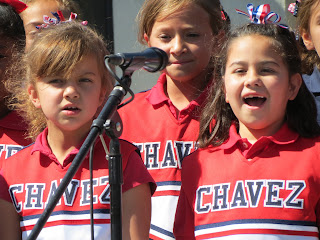 Yes, the singing little girls are celebrating Cesar, not Hugo.  Apparently there was some confusion over this.

After the local talent, the luminaries arrived, and speeches were made. 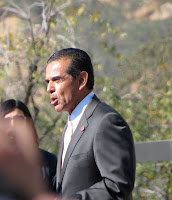 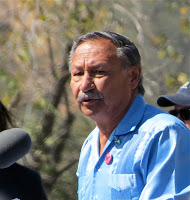 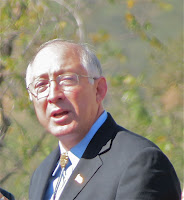 The speeches were good.  They were rousing.  They were passionate. They were meaningful.   They brought a sense of memory and achievement to the crowd.

After the speeches, there was some festive marching band music, from a band I couldn't see.   The band made you feel like Obama was going to come out on stage any second.   But he didn't.  And then he didn't some more.  And then there was more waiting. 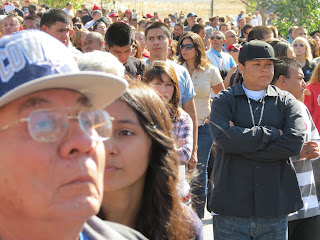 Finally, after much more marching band music and much more waiting, a man came out and took the microphone.   It was the man who was going to introduce Obama.  A rustle of excitement went through the crowd.   The high school girls behind me who had sat down stood up and began to murmur "Obama! Obama!"  A shout of "Four more years, four more years!" moved through the crowd.  I positioned my feet awkwardly on the tiny narrow step I was on that gave me just a tiny view several hundred feet away of the tiny heads that were speaking into the distant onstage microphone.

Then the  man who was going to introduce Obama  left the microphone and Obama himself appeared.

"I see Obama" shouted the high school girl behind me to her friend, standing on her tiptoes.  "I see his head!"

Cameras came flying out of peoples pockets and bags and were raised enthusiastically into the air. 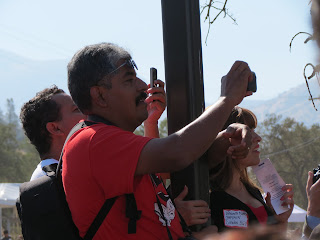 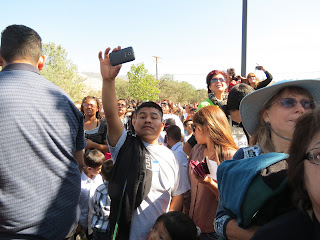 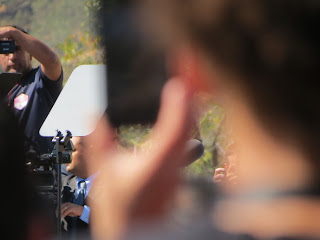 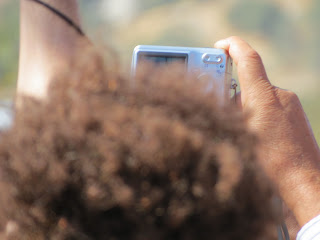 Obama began to speak.  It was another good speech, even better than the previous speakers because well, because it was Obama, and he was on.   He honored Cesar Chavez and he spoke about the American dream.  The people roared and the cameras waved in the air.    I was happy to see him infused with his old charisma again after his lackluster performance during the debate.

Most of the photos I attempted of Obama were like the one above, full of hair and blur and other people's cameras.   But yes, I did manage one.  Just one.  Obama in a quiet moment, squinting into the sun, a press photographer behind him, probably just after his speech: 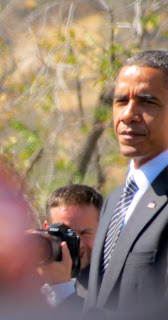 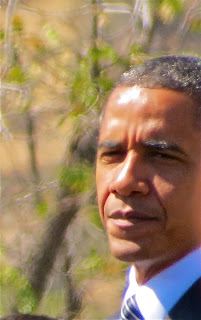 When I cropped this photo, I wondered what he was thinking at the time, while he was staring out at the crowd.  He looks pensive, even a bit weary.  He was due in San Francisco a few hours later to do it all over again, the crowds, the cameras, the speeches.    He certainly has a job I wouldn't want.

After a round of thunderous applause for Obama's speech,  the crowd dispersed to  drink water from paper cups and snack on potato chips and granola bars that were offered on site.    To complete the day,  an  Aztec ceremony was performed: 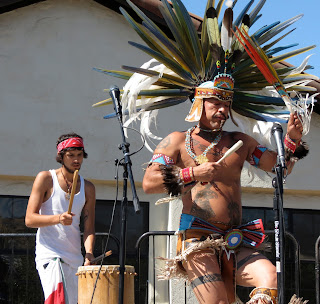 Then we all headed back to the busses.   Out of the 7,000 people at the event, somehow I ended up standing next to the "De Colores" group again.  They were still laughing  and singing.  While we did more waiting, busses came and went in all the wrong places, picking up everyone but us.

I learned that the older man in the group was a professor of Chicano Studies at Pomona College who had worked with Chavez back in the Sixties and has taken his students every year on a "Farmworker spring vacation" where they get to know about the farmworkers and the issues they have faced.  While the bus continued not to come, he was busy talking to a redheaded man about the common struggles between the Mexicans and the Irish.   When one of the  busses finally opened its doors to us and we all got on and took our seats,  he just kept on smiling and talking.

I got back to San Francisco later that evening, tired but glad I had gone to the event  The only glitch was an email I discovered the next morning telling me I would not be able to attend the Obama dedication of the Cesar Chavez memorial.   I was one of 3,000 people who had been disinvited.

I sure hope Cesar Chavez doesn't mind that I crashed his party.

And now I will leave you, with some verses and a video of   "De Colores".  This video is one I found on Youtube.  It just happens to be of the same professor that was singing De Colores next to me as we waited for the bus.  His name is  Dr. Jose Calderon.

There are heroes everywhere.  Sometimes they get  their own national monuments and sometimes they don't.  Sometimes we are lucky enough to be standing right next to them.  All we have to do is turn around and hear them singing.


Posted by Lisa Gale Garrigues at 9:28 AM