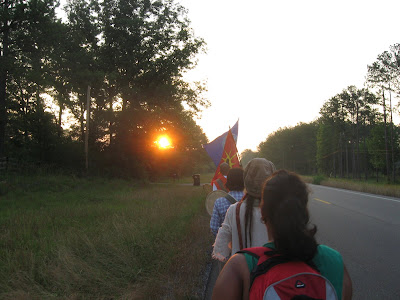 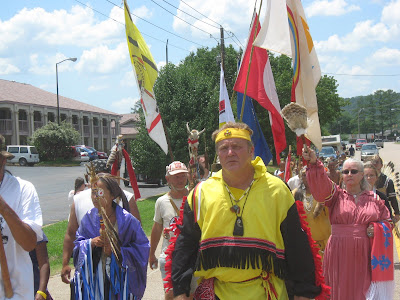 In the warm Alabama night, I join a Native man* as he sits with two light-skinned local Cherokee men who are wearing traditional dress.

Usually easygoing and friendly, he flares up when I sit down.

"Yes sit down," he barks, "You might learn something. "

The atmosphere is already thick when I sit down, so I wonder what's been going on.

"You can't prove you're Indian," he eventually says to all of us, taking out his tribal enrollment card from his back pocket and waving it around.

"That's right," I say. " Which is why I call myself an ally and not an Indian, even though I may believe the family oral tradition of Indian blood."

"Well I'm working on it," says the younger of the Cherokees.

"I can not only prove I'm an Indian," he continues. "I've lived it. All you can talk about is the Trail of Tears," he says to the two Cherokees.

He is getting angrier, his voice rising.

Actually, he is a mixed blood, and has spoken of being discriminated against by both whites and Indians.

When the two Cherokee leave, he continues on.

"Why did you go to South America? It was guilt, wasn't it?"

I feel like he is pushing all his pain towards me, wanting me to feel it.

"We are victims," he says. He knows I'm half-Jewish and begins to tell me how much more victimized his people are than mine. I know that the story of my relatives has been told and heard and that the story of his still needs more telling, but I am reluctant to fall into the "my people are more victimized than yours" trap, one that I have heard before from friends on the Left and one that I feel ultimately leads nowhere.

"There is nothing to be done," he says, "the hoop has already been broken."

Instinctively, I recoil from this level of despair, even though I have seen it in the eyes of Indian men before.

I'm finding it difficult to write about the walk, because there seems to be so much pain that flares up between all of us--between the races, between the generations, between full bloods and mixed bloods. Several people have made final angry speeches in morning ceremony and left the group. Others have pleaded, "Why can't we all just get along?" and "We all bleed red."

But we keep walking.

Then suddenly, we are stopping in a new community and people are showering us with welcome and praise and appreciation, and we remember why we are doing this.

And maybe the hoop can be mended.

(*I am deliberately leaving out details like name and tribe to tell the story but maintain the privacy of the people involved.)
Posted by Lisa Gale Garrigues at 1:38 PM