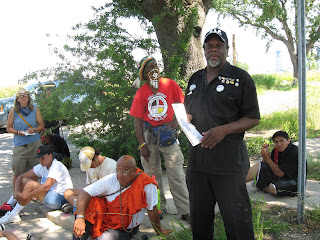 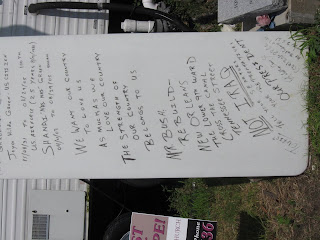 On May 27, Hurricane Katrina survivor Robert Green spoke to people on the Longest Walk Two about the post-Katrina situation, and why he is living in a trailer in the ninth ward:


My name is Robert Green. I've lived in the ninth ward of New Orleans for 38 years, and I'll live in it for
38 more years, god willing. My grandkids were here. Basically we lost my mother and granddaughter on the same day..On that same day, we lost all of our neighbors,we lost a lot of our family, we lost a lot of our history.

That's the most important thing to me, it's not necessarily bringing back the house that I live in, because I live in a trailer and that's my home. My children are here, PJ saw, Dennis saw, and Chris saw we have a family, but we are standing actually on people's houses, on people's land. One of the things that's kind of funny actually is we had a guy from Italy and he said
What do I grow on my land? And I said if I owned this land I wouldn't be living in a trailer

What we have to do, when the railroads came though communities in the old days, if one family didn't sell then they couldn't develop the land, and we're gonna stand here and reclaim our homestead. As you can see, we are reclaiming this house and rebuilding it..

As you can also see I have a sign that says we want our country to love us as much as we love our country. .And we feel that every day because the volunteers, people like y'all, even the children bring people that bring help and hope to us so we have something to look forward to..

We also know that we are part of a country that we paid the price for, my grandfather had 10 kids, all of them served in the armed forces. I have an American flag flying. It's important to me on days that we feel like we have to fly it at half mast that I feel like we are a part of this country because we paid the price, we paid for land, we paid taxes. Like i say to you, we have a lot of heart sweat, a lot of people who want to be back home but they are just not being embraced by the powers that be. So bringing attention to this neighborhood is really important to us, and it's going to make a difference..

A lot of people don't realize one person can make a difference, one march can make a difference. the difference that y'all make is that y'all are not just marching in this neighborhood, y'all are marching all over the country. We had Jesse Jackson here, we had Al Sharpton here. They marched in here, and they marched out. Y'all have done more justice by coming here than they've done when they've come down. What's most important is not the cameras that they like to stand in front of, but it's the people whose faces I see, people who make us whole again, and that's what y'all are doing for us, you're making us whole, and that's important to us.


I didn't get into much of the facts of my granddaughter and my mother dying, but basically their spirits are here, and as long as this land is not redeveloped for anything that's unnatural, anything that doesn't have family houses back, people back, then they're going to be happy.

(holds up xerox photos of grandkids) My grandkids as you can see, they're happy, and that's the most important thing to me... as long as they're happy I can be happy. My son is happy. My kids are happy.

We were a community and we spent a lot of time with each other, that's something that was important to us, that we get that back and that we really work it.

People like Charles, like Mr Richards who lie in this house right here like Mrs Guerney, they're going to stay here and make sure that we reclaim this land and that the use of it is something for the people, because what is better than family to take back the land.

I thank y'all. It makes a big difference to us to see that we are cared about by so many different people...

I'm gonna walk with y'all, gonna carry the flag when we walk through the neighborhood..


We asked for $150,000 for people to rebuild homes, but the city government comes up with all kinds of reasons not to give the money. .Down here, you can see the loss of houses.

I haven't really received any money yet, i'm still waiting to receive it.

I'm getting a house built with Brad Pitt. When Brad Pitt builds it. I'll give him 85% of my Road Hall money, which I don't mind because the main thing is to rebuild the house..

But it's kind of crazy.

My mother had 4 children ,all of us share in the property..they won't let me build with all 4 children, I have to build by myself and both of them have to give up their right to the property just to let me rebuild..and thats kind of a crazy thing because we're all in it together and we should be able to rebuild together..that's the way they make the program work

And besides that they have a lot of people who have family that won't come together, that's another roadblock..

For me, in my situation. what I have left of my mother's house are those back steps..so if my nephew wants to have soemthing I can give him a piece of the back steps y know what I'm saying but if we want to build the house i have to get them to sign off.

That's the reason I came back to the FEMA trailer, even when I knew it wasn't safe.

A lot of the people who are working with us, I wouldn't have met them if I were somewhere else so it's important to have someone here.
Posted by Lisa Gale Garrigues at 10:23 AM