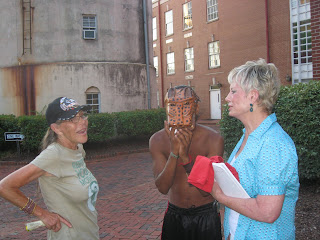 Coming into "The South" for a northerner (or better said, a Westerner) like myself, has felt like visiting a foreign country.

I have, quite frankly, approached Alabama and Mississippi with more trepidation than when I travelled into the Amazon jungle.
The names of the cities here are not just city names to me--they are syllables that evoke particular images from my childhood: Birmingham, Montgomery, Hattiesburg translate for me into "rabid white crowds, dogs, hoses, George Wallace, lynchings." As we walk through these cities, walkers and locals say: "This is where two black men were lynched," or "this is where a rabbi was murdered."

Is there really a New South? I have asked people along the way.

The response has depended on who is speaking. "Well, you know, the old-timers, they have a hard time changing," says one.
One of these 'old-timers', a white guy in his sixties who was a police officer during the Civil Rights demonstrations, says he thinks there is more racism now, exacerbated by affirmative action programs which are resented by whites. He is one of those people who thinks the country will collapse to the point where everyone will be protecting their own with big guns.

A black woman in a tiny country store in Mississippi, when asked if the KKK is still around, says "Oh yeah, they still around."

The cheerleading squads on the University campus in Hattiesburg are practicing when the Long Walkers walk onto the campus..they seem neatly divided into white and black. Professors on campus say that progress is still slow, though most of the young generation doesn't seem to suffer from the blatant racism that their elders have.

What amazes me is when a couple of different professors--at two different universities--tell me that many of their students come into their classes with no knowledge of the history of the Civil Rights movement here in the Sixties. One prof, after having shown a documentary on that era, was asked by his students: "Why weren't we told about this sooner?"

Trail of Tears? For most young people, it's also not in the history books. Unless you are one of the many people around here who want to rediscover their Cherokee roots.

I did go on a couple of Plantation Tours... an interesting way to learn about the colorful people who lived in these Southern plantations, and some of the history of the area. My friend Melinda, who writes a column on old plantations here in Tennessee under the name "Auntie Bellum" says she has only been on one tour that described the life of the slaves on these plantations.

There definitely seems to be a kind of Southern Discomfort going on with southerners and their history.

And with me. I am both fascinated and repelled by the South, which after all is a big chunk of our own American history,despite their efforts to secede. I have ancestors who fought and died for the Confederacy--some who may have lived in those big plantation houses and some who themselves picked cotton.

In Alabama, a carfull of teenage yahoos (no not the internet yahoo) drove around and into our camp yelling stuff about 'hippies' and 'little bitches'. We managed to chase them away, but not before one of the male walkers whispered, "It's the Klan" and a young woman admitted she was scared to death.

And yet, on the Longest Walk, we have met some incredible people here in the South--warm, hospitable, generous, thoughtful people, white, black, Native and all the combinations thereof.

(photo caption: One of the warm, generous and progressive people we met on the journey was this professor from the University of Montavalo in Alabama, (right), shown here speaking to two people from the Longest Walk. She traded the mask to the guy in the middle for his t-shirt, because the mask was originally from his people in Mexico.)
Posted by Lisa Gale Garrigues at 1:18 PM